You go through the gate with the inscription “Viminacium” and travel … During that time you try to capture it with one glance, but you do not succeed. You only sense its limits, in the distance. The first impression is undoubtedly the vastness, its grandeur. Finally, you get to the main building and go on a tour, you realise you are walking through history! You walk in wonder and almost at every step, you wonder: how is it possible that someone so long ago, at the beginning of the new era, not only had a great architectural, urban and strategic vision, but also managed to put it into practice! 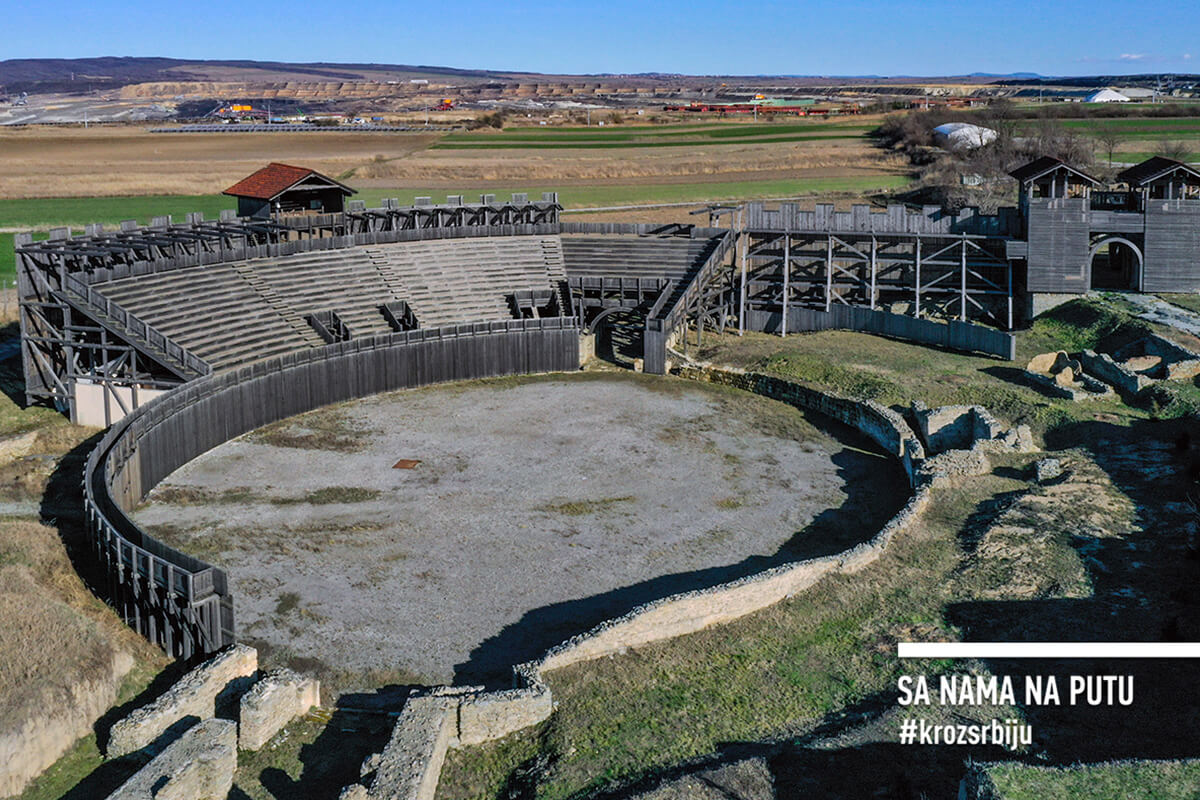 As you explore the site, it is as if someone has placed you in a time machine and every hour you expect an old Roman to appear from somewhere in a recognizable toga.

Here at Viminacium, you are actually witnessing the gradual emergence of a nearly two-millennium-old Roman city and military stronghold. It is the only legionary camp in Europe that is located in an uninhabited area. As only some 3% of the total heritage has been excavated so far, you give free rein to your imagination what else could be hidden under this, now our country, and the very thought leaves you breathless! Balkan Pompeii, as it is nicknamed, is eagerly waiting to re-emerge and reveal the secrets kept for centuries.

Currently, diligent work is being done on the preparation of a dossier for the inscription of the Danube Limes area – the eastern part, which includes Viminacium, on the UNESCO World heritage list.

Everything actually started from a military stronghold, but soon, due to its location, fertile land, ores and waterways, it developed into a settlement that became the capital of the province of Upper Moesia. Wide streets that intersect at right angles, temples, public baths, villas, arenas, three aqueduct lines, squares and city walls. There is no doubt that the Romans were excellent connoisseurs of architecture and construction, as evidenced by the found compasses, rulers, temples. And the remark of one visitor drew our attention to the appearance of the former buildings: “Well, they have always had a sense of beauty!”, Alluding to today’s Italians who are considered the nation with the most taste.

On the road with us to Viminacijum

Among the curiosities is the rest of the cobbled Roman street with a curb! An engraved trace of carriage wheels can even be seen on one stone. Or so it seemed to us.

We toured the thermal baths, as public city baths with fireplaces for underfloor heating, public toilets in which water was constantly flowing, and there were almost no unpleasant odours, “domuses” – luxurious villas of the richer class, but also “insulas” – high-rise buildings for the general population, sports arena for entertainment of the masses, city library, military camp …

We got the impression during the visit that those human civilizations and generations were more advanced than ours were, because they had just adopted knowledge and did not have this today’s technology and machines, which would make it easier for them to build these miracles.

Viminacium was, without a doubt, an extremely important city with its own mint and port for the river fleet. Chroniclers described it as the most beautiful city of the Roman Empire in the second and third centuries, when it had about 40,000 inhabitants. It was home to both pagans and Christians, as evidenced by tombs painted with frescoes with pagan and Christian motifs. 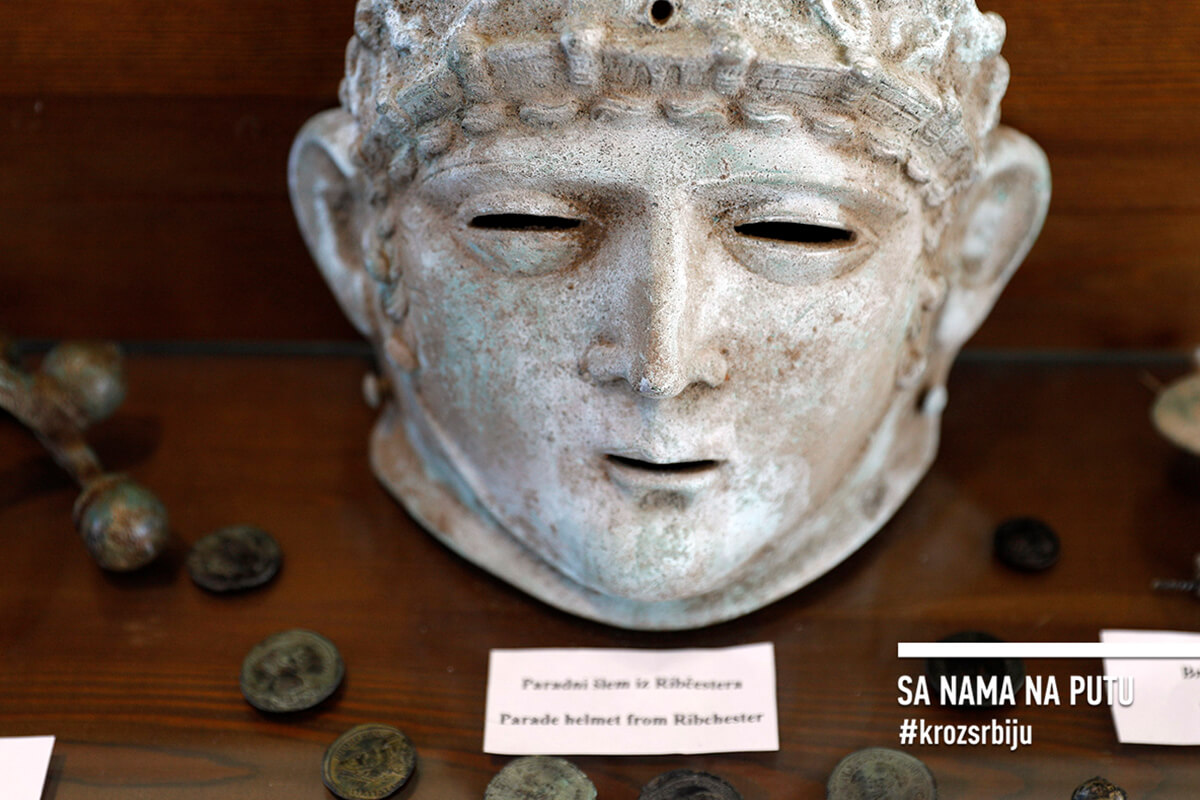 The entrance to the underworld is special and mystical. No worries, skeletons do not pop out, but we do not really recommend it to claustrophobic and taller ones.

The “Viminacium Mona Lisa”, Christ’s monogram (one of the first traces of Christianity) and the tomb with Cupid are worth every second of a contorted body and a “duck” walk. Another special feature of Viminacium is more than 13,500 graves, from the 4th to the 6th century, discovered so far in necropolises. It was a city of skilled artisans and excellent medics who also practiced surgery (an instrument for opening the skull was found), and many of today’s jewellers would envy it on finely made jewellery made of gold and silver.

Viminacium originated in the first decades of the first century on the territory of the Celtic tribe Scordiscus, at the confluence of the Mlava and the Danube, at the strategic crossroads of communication and trade routes leading from west to east and from north to south, which enabled rapid development. In Roman times, it relied directly on the tributary of the Danube, which today is about 3.5 kilometers. The area of the former city and the military camp of Viminacium (more than 450 hectares of the wider city and 220 hectares of the narrower city territory) is today located under arable land.

It was also an important stronghold of the army of the Roman Empire. After all, this confirms that the Viminacium included the Seventh Roman Legion, whose motto was “Claudius’ loyal and faithful” because of the loyalty shown in the rebellion of the former governor of Dalmatia (42). Legionnaires were an extremely esteemed class in Roman times. First, they were recruited among Roman citizens, and then gradually, they were chosen from the ranks of the population (legionaries served for 25 years, had a salary and enjoyed various legal privileges).

The well-fortified walls of the city, which resisted for a long time, stumbled in 441 before the invasion of the Huns, who looted and destroyed it.. 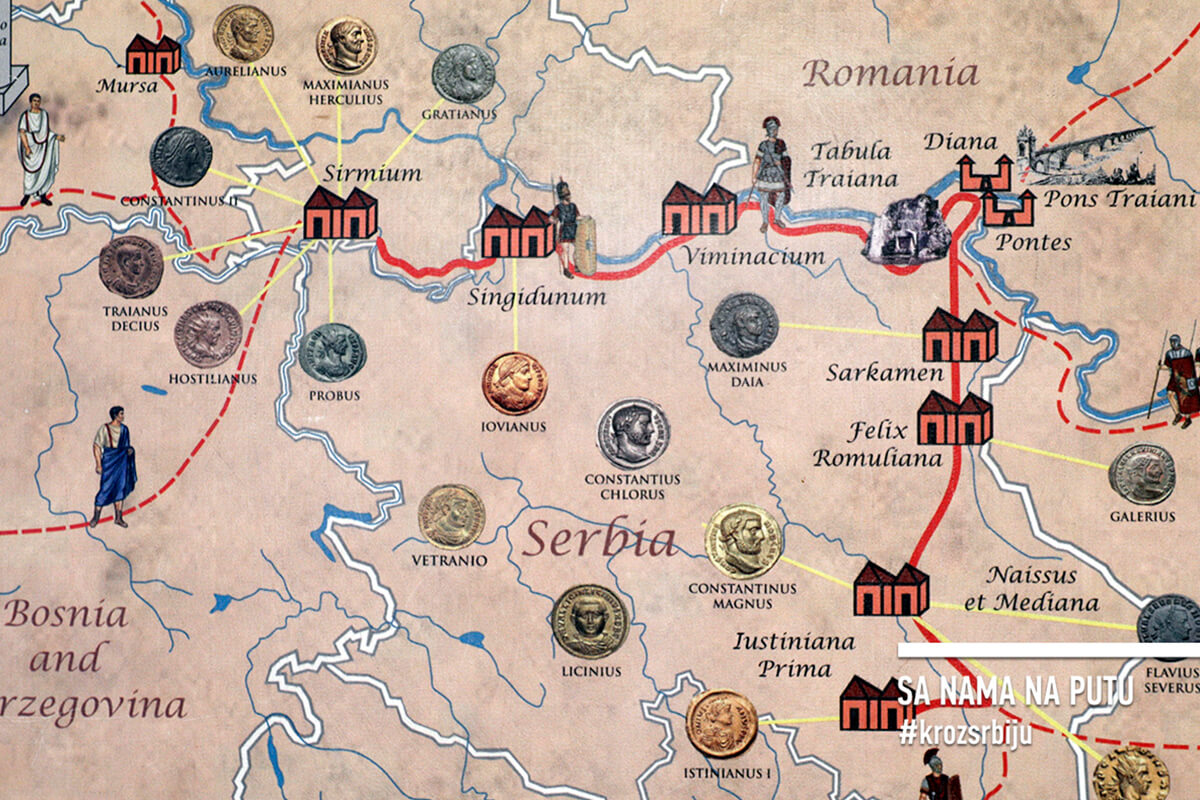 The Romans of that time and their emperors and city founders also thought of entertainment. They knew that the people should be given bread, but also games. And the games back then were cruel – gladiator fights with each other or gladiator fights for life and death with bears or some other animals. 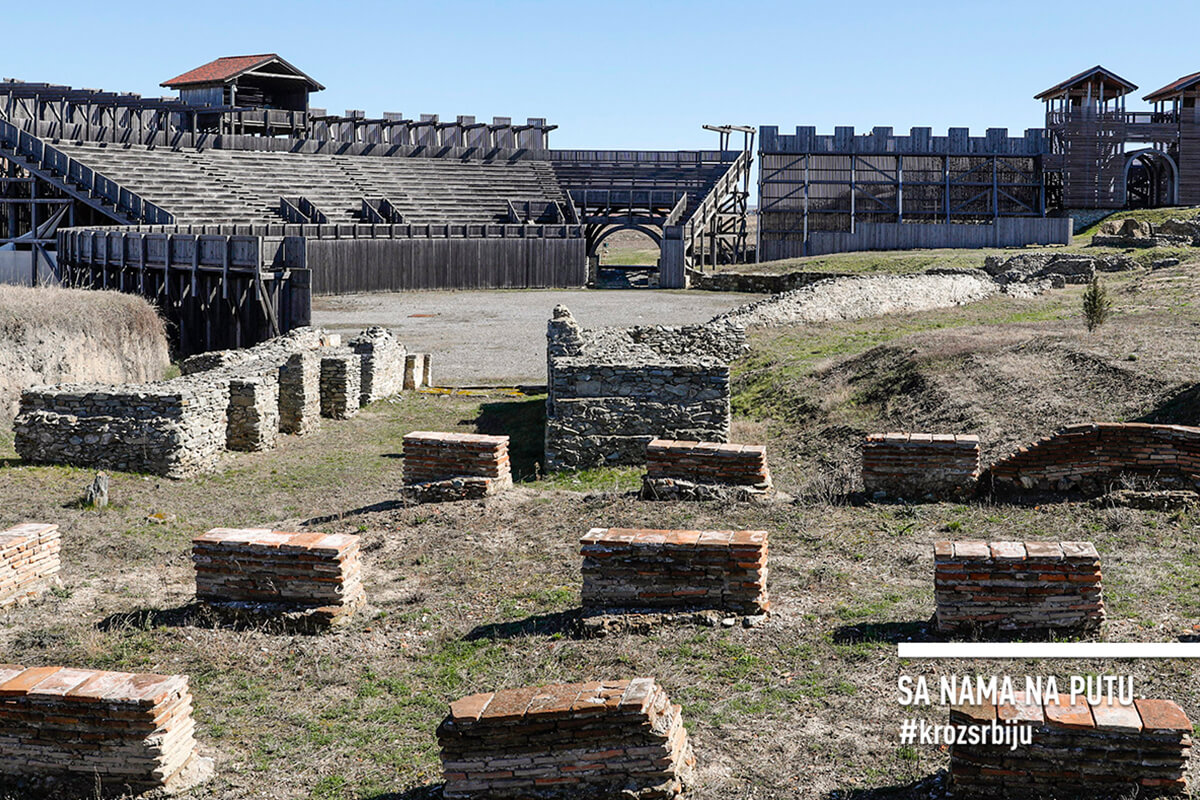 Approaching the amphitheatre, which could accommodate up to 8,000 visitors, and which was painted inside with wild animal skins, we noticed a replica of the carriages, which served as a parade of winners after winning success in battles or races. The amphitheatre had tribunals – lodges for wealthier and more prominent citizens, like today’s VIP lodges.

A special attraction of Viminacium is the skeleton of a mammoth, called Vika. It is completely preserved, and it is estimated to be between 500,000 and a million years old! It is a mammoth female, about 60 years old. It was 4.5 meters high, more than 5 meters long, and weighed about 10 tons. The mammoth was discovered in its entirety, thanks to the fact that it remained stuck in the sand and mud on the shore. 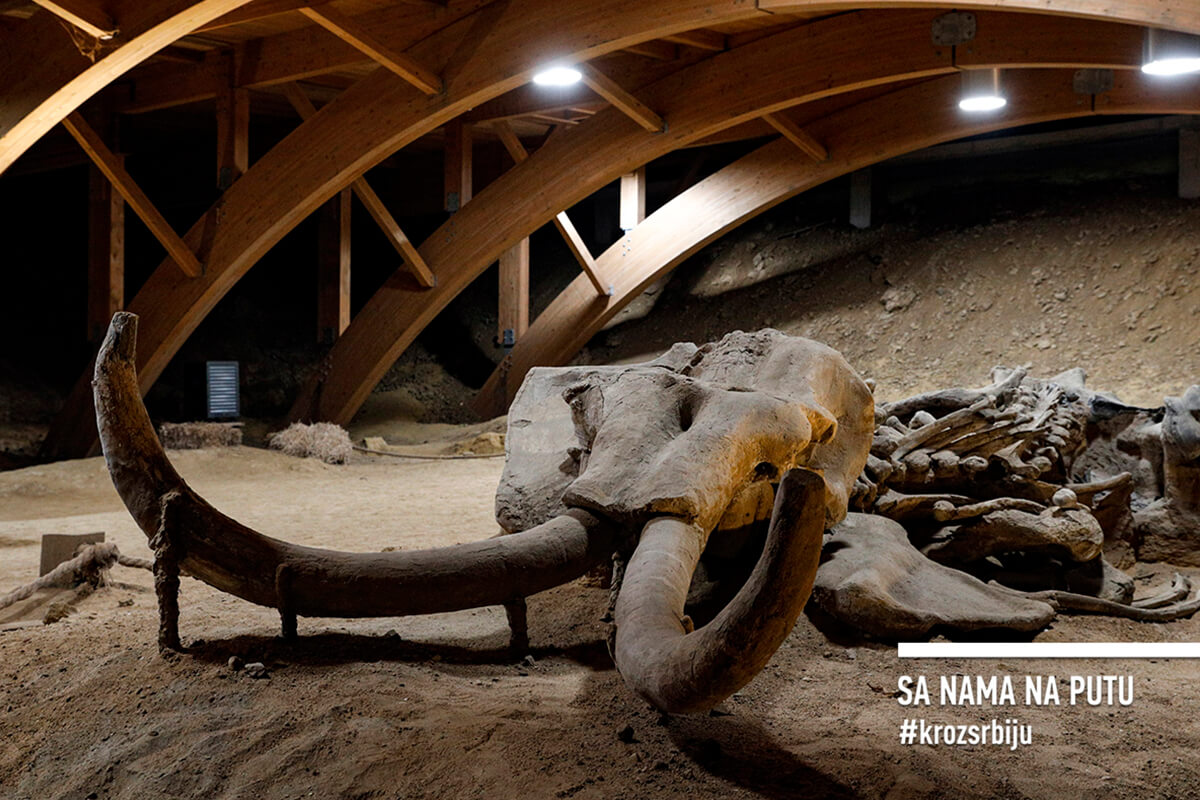 The latest news from Viminacium, just when our team visited this locality, is that a ship between 15 and 26 meters long was discovered in its immediate vicinity, probably from the ancient period.

It is a finding from the ranks of sensational, unique and incredible, without exaggeration ... The type of ship itself has elements that have not changed significantly over the millennia, so the finding cannot be dated that way, 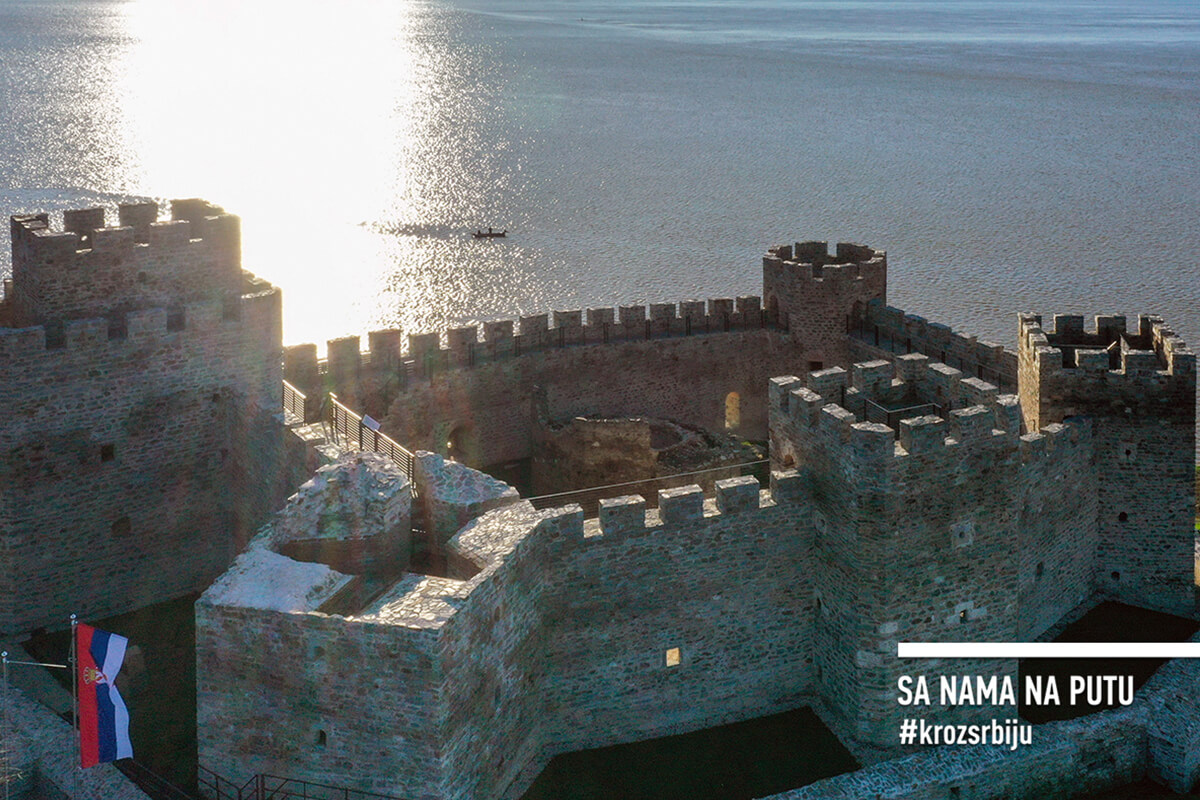 Once you are in Viminacium, it would be a shame not to visit Ram, about 25 kilometers away. A stone was delivered from it, from which the entire Viminacium was built! By the way, a fortress was built in that place in Turkish times, the reconstruction of which was recently completed and today it is a kind of attraction. Its walls offer a beautiful view of the Danube. For those who have not tried it so far, there is a possibility to transfer from Rama across the Danube to Vojvodina (Banatska Palanka) by ferry. A great adventure for the end of such a historical adventure.

This is our beautiful Serbia, rich with historical heritage and extraordinary nature, as if giving us a message that we have something to safeguard, something to truly enjoy and be proud of.

So travel with us and after us, visit Serbia, and explore its treasures. And in two weeks only, we will take you on a new adventure.