At 25 kilometres from Zlatibor is Sirogojno, a small village that resists the onslaughts of bulldozers and concrete. The first association with Sirogojno is certainly the sweater and other woollen garments, which made this place famous not only in the former Yugoslavia, but also in the world.

You should not visit Sirogojno just because of the sweaters worn by queen Elizabeth or Jovanka Broz and other celebrities. One of the main trump cards of this place is the Open-air museum – Staro selo, the only one of its kind and of such concept in Serbia

On the road with us to Sirogojno and Gostilje waterfall

History of the museum

The idea of building such a museum in the former Yugoslavia dates back to the late 1950s. The first one was to build one such museum on the Avala mounting. Another idea was to build a museum like this in the centre of Zlatibor. However, none of them has been implemented.
Fortunately for Sirogojno, the idea of an open-air museum was realised here, and the greatest credits are to be given to Dobrila Vasiljević-Smiljanić.

This museum is specific in everything when compared with other museums in Serbia, because not only is it at the open-air, but it is also a museum of folk architecture. What is its basic essence is, in fact, the culture of housing in the Dinaric region in the 19th century .

says the director of the Museum, Svetlana Ćaldović.

The first log cabin was moved to this location in 1980. It was a granary for grain, which was donated by the famous priest family Smiljanić.

At this unique place, you can see and feel how our ancestors once lived.

During the summer tourist season, the museum exhibition comes to life here. The housewives prepare some local dishes in the fireplace, craftsmen demonstrate old crafts, music festivals are organized, a fair of old crafts, various workshops for children and adults …

The museum consists of a unit that makes a permanent museum exhibition, and it consists of two households from the 19th century, completely authentic when it comes to the objects that are in the household, their layout in the yard and interior. Within this museum-village, there is a hall, i.e. a gallery made for museum programs, such as promotions, scientific gatherings, exhibitions …, then a shop of old handicrafts and a herbal pharmacy, a tavern and lodgings.

One of the buildings, which used to be a shepherd’s hut, has been turned into an old-school museum display. 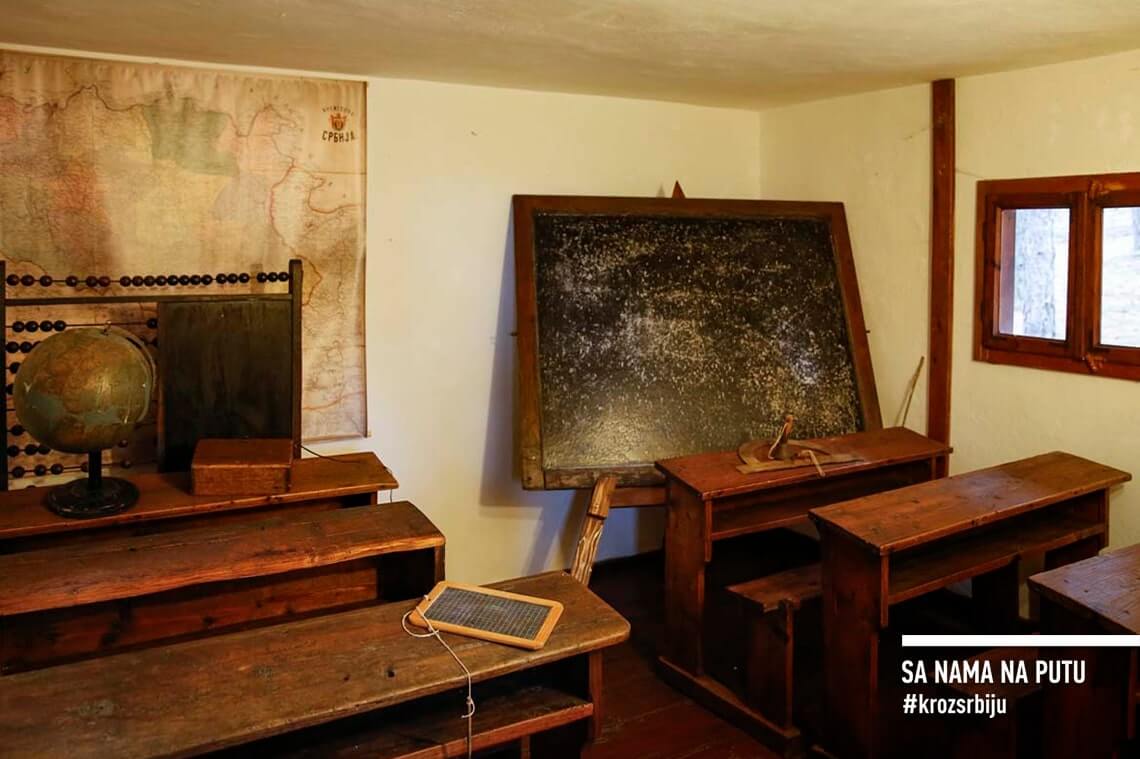 During the period of Turkish rule in Serbia, there were only Turkish primary and secondary schools – madrasas. Serbian children did not have their own schools, so they became literate in monasteries or with priests. A visit to this museum is also a unique opportunity for your children, accustomed to mobile phones, to see what school bells, abacuses, school desks used to look like (they used to be called “skamije” – benches – from the verb “scamutare” – which means to unriddle, to acquire knowledge), blackboard, pupil’s bag …

You will also learn how students used to be punished: The teacher could punish disobedient students with a stick – a stick, kneel on the floor, on corn kernels or walnut shells, lock them in the dark basement of the school or have them sit in so-called “donkey benches” (benches for stupid students).

You can sleep or stay in the hostel for a few days. The price of accommodation for one person is 2,000 RS dinars, and the lodgings are fully equipped (beds, bathroom, kitchen, TV …). You can eat in a nearby inn, and you should not miss the specialties of this area – black bannocks with cream and prosciutto, buckwheat pie, pie with spinach, pie with cheese, moussaka with nettle, of course, lamb, prosciutto, bacon, greaves are indispensable…

Knitters have made Sirogojno famous

“The sweater is a symbol of this village and everything came from that Sirogojno sweater,” Svetlana Ćaldović says, referring us to the Museum of Knitters and the famous Sirogojno fashion product, which also “walked” the world’s catwalks.

Mass knitting of sweaters in Sirogojno began in the sixties of the last century, when the works of Zlatibor women were presented at an exhibition in Belgrade. After it turned out that domestic sheep did not really give good wool for the sweater, the import from Iceland started. And so, for decades, the real sweater from Sirogojno has been knitted exclusively from Icelandic wool, and even the period of sanctions, war, poverty, has not stopped production.

This craft is passed down from generation to generation.

“My mother and grandmother used to knit and that is how I learned from them. I have been doing this for maybe 30 years, “says one of the knitters, Gordana Ilić, who usually works at home, when she finishes all her house chores.

“How many sweaters have I knitted?” I really do not know, their number is unknown!”, she answers the question with a smile. She also says that it takes a few days for one sweater, and the most complicated are the jackets that are knitted, and then the embroidered with motifs on it.

The inspiration came from domestic woven products, carpet patterns, and at the beginning of the seventies, flowers began to be added, then Zlatibor landscapes, houses and trees were painted, says Rosa Ljubojević, the manager in the production of sweaters. There are also special orders, and we found the knitters just at the end of a very complicated sweater with the symbols of all the world’s largest cities (Statue of Liberty, Eiffel tower, church in Moscow …).

“Yes, but no one treats us that way,” they respond.

When you are already in this area, it would be a pity not to visit a truly magical place – the waterfall in Gostilje, the birth village of Dimitrije Tucović. The waterfall is located a few kilometers from Sirogojno (everything is marked, you cannot get lost and the road is in good condition). 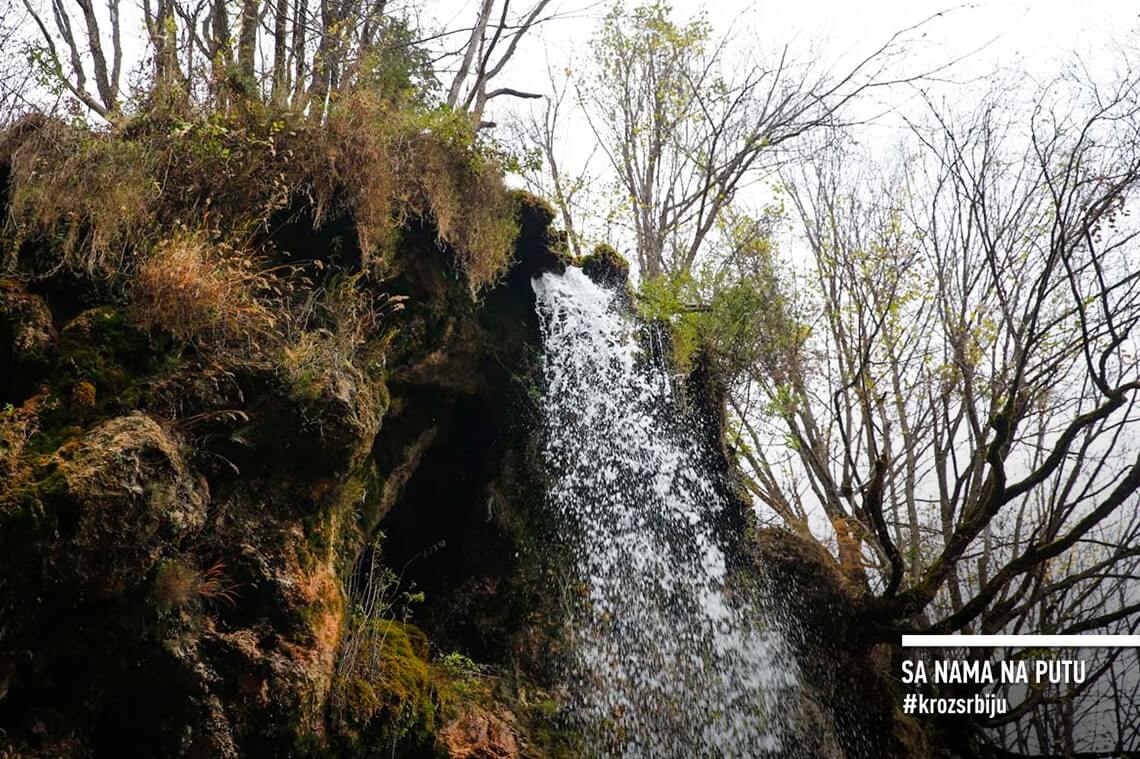 The water falls from a height of 20 m down the limestone cliff. Downstream from the waterfall, the stream builds a large number of smaller waterfalls, cascades, rapids and whirlpools all the way to the mouth of the river Katušnica. The rocks covered with moss and the water that breaks through them, making rapids, make an impressive picture.

The waterfall is reached by a paved concrete path, so that the access is more than accessible

So travel with us and after us, visit Serbia and its treasures. And in two weeks we will take you on a new adventure.